This isn't a problem if you are running smaller applications and cached data isn't vital to their performance. However, for high-traffic applications that need to have the cache up all the time, this becomes a problem. Another thing to consider is the possibility of load-balanced servers - using the Object Caching in .NET 4 isn't distributed. That means it will only store its cache per application pool. If you have two servers it means that you will have two different cache stores.

I have recently been introduced to the world of Memcached. Memcached is a free & open source, high-performance, distributed memory object caching system intended for use in speeding up dynamic web applications by alleviating database load. You can think of it as a short-term memory for your applications. The brilliant thing about Memcached is that you run it on one server and point all the applications to the Memcached server. This way all servers use the same cache! Another bonus is that even if you redeploy your app, or recycle the app pool in any way - the cached objects are still there. This is great news for larger applications that need to be online constantly and can't afford any downtime with regards to it's cache. 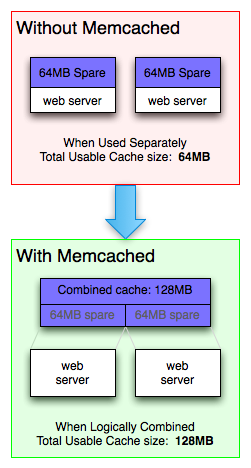 Memcached is no new comer to the web. It is used by major players such as Wikipedia, Flickr, Twitter, Youtube, WordPress.com and Digg. The advantages of using Memcached are endless and getting it setup on your machine is really simple. There are two parts to getting Memcached setup - you need the Memcached server and then you need to get the client API. There are few client API available for most of the common languages out there (Ruby, C#, PHP, C, Java).

I had a bit of trouble actually finding a decent ready-to-go implementation of Memcached for Windows. I got my version 1.4 from this site, but it seems that there are also other versions available here and here. Once you have downloaded the files, you can either run Memcached as a console application or install it as a Windows service (This is the recommended option). In order to install it as a service, run the following from the command line:

Next, you need to get the client API to start using the cache. There are a few different options with regards to the C# client API, but I chose Enyim Memcached. Open Visual Studio, create a new project and add a reference to the Enyim.Caching library that you downloaded.

You will also need to update your web.config or app.config to include the following lines. In your configSections:

And then just before the end of the web.config file add the following:

You will notice that the address is "127.0.0.1" and port "11211". This would normally be the network location that your Memcached server is hosted on, but in this instance I am testing it locally and this is the default.

Using the library is really simple and intuitive. Although it's not a real world example, the following code will store and retrieve a value from the cache.

A while ago I wrote about Object caching in .NET 4. I created a little wrapper that used simple syntax and wrapped around the System.Runtime.Caching namespace. Using the same class, we can just update it to point to our Memcached server. If it makes it easier for you to use the class I wrote and combined with the Memcached API, it is available for download here. Also, just in case the Memcached servers are not available at any of the locations I defined above - you can download version 1.4 here.

I searched the web and found that there is very little documentation with regards to C# out there - I hope this article helped to get you up to speed with Memcached!

The web is full of PDFs floating around out there. How many…